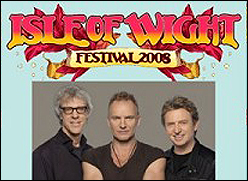 NEW YORK (CelebrityAccess MediaWire) — A new UK date has been added today with confirmation that The Police will headline and close the 2008 Isle Of Wight Festival on Sunday, June 15.

As this is a festival there will be no fan club presale for the show which, of course, is general admission.

Affirming the massive success of their tour in North America and Europe, The Police were awarded both the Top Ticket Selling Tour and the Top Grossing Tour at the 4th annual Billboard Awards in New York last week. Currently on tour in Central and South America, The Police have already played to more than 1.5 million fans.

And now, due to overwhelming demand, European fans who were unable to see The Police will have the opportunity to catch the top selling tour of the year when it returns to Europe next summer. The Billboard Award winning tour will start 2008 with performances in Australia, New Zealand and Japan before arriving in Europe for dates in France, Denmark, Spain, Poland, Czech Republic, Norway, Germany and the UK.

Beginning early June in France through early July, The Police will play a variety of venues including festivals, outdoor stadiums and indoor arenas.

As already announced, The Police will return to Mannheim's SAP Arena on June 5th and Dusseldorf at LTU Stadium on June 8th as part of the rescheduled tour announcements from dates last summer. In addition, The Police have added one more show in Germany – Saturday, June 28 at Zentralstadion Leipzig marking the first time the band will play in Eastern Germany!

In addition, Norwegian fans who were unable to see the tour last year will be have the opportunity to see The Police when they performance at Vallehovin on Wed, June 11. The Police will also return to Manchester for two rescheduled performances June 17 and June 18 at Evening News Arena.

Additional cities and venues to be announced.