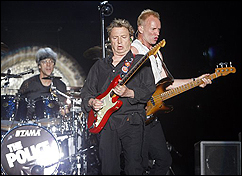 NEW YORK (CelebrityAccess MediaWire) — The Police have announced that they will perform a special farewell concert in New York City at the end of the final leg of their hugely successful world tour. The exact date of the show is still pending but it will be some time in August.

Not to worry, you should still have plenty of time to catch the band before they step once more into the pages of history as they currently have about 50 dates scheduled through the summer in North America and Europe.

The final leg of the tour kicked off on May 1st in Ottawa and will carry the band up until at least August 5th, when they stop at the Nikon at Jones Beach Theatre in Wantagh, N.Y.

And if The Police themselves aren't enough to get you to come out, Elvis Costello & The Imposters have also announced plans to join tour for many of the dates on the final leg.

The tour, produced by Live Nation, has been one for the record books and according to Billboard, Sting and the boys are well on track to gross more than $340 million, making it one of the 5 highest grossing tours in history.

The farewell concert will also be a fundraiser event with the proceeds going to support arts programming for New York's public television stations WLIW and WNET. The concert will also benefit New York Mayor Michael Bloomberg's MillionTreesNYC, in its effort to plant more than one million trees in the city.

"We kicked off our very first American tour at CBGB's in 1978 and this summer, thirty years later, our journey will come full circle as we play our final show here in New York City," said The Police. "We are honored to partner with public television and have a deep respect for their commitment to arts and culture." – CelebrityAccess Staff Writers