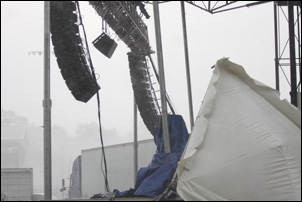 NASHVILLE, TN (CelebrityAccess MediaWire) —
Sam Bush was tearing up the main stage with some blazing bluegrass on a sunny Saturday afternoon, when a few raindrops at the Allegany County Fairgrounds in Cumberland, Maryland, site of Delfest, suddenly turned into a storm that no one there will soon forget. The staff and crew had worked most of the week to get the site in pristine shape for thousands of campers and music lovers. The fans began arriving on Thursday and by Saturday everything had settled into a nice rhythm, which the storm quickly and spectacularly disrupted.

However, the spirit of Delfest-bluegrass legend Del McCoury's music festival-shone through. As rain turned into hail and high winds, the staff, crew, artists, and fans joined together to keep everyone safe and save as much equipment as possible.

When the storm finally passed, the devastation was remarkable. In the music meadow, all the tents had blown away from the main stage and most of the vendors had lost their wares. The VIP tent was folded over. In the campgrounds, tents were scattered, ripped, flooded, and some were just plain gone. Del McCoury's bus also sustained several thousand dollars in damages as a tent flew more than two hundred feet over a backstage area, which was crammed with folks waiting out the storm, and slammed into the front corner of the bus.

The security staff, during and after the storm, checked on the safety of the attendees. Luckily, there were no serious injuries. And before the rain even stopped, the crew was rebuilding the grounds, repairing blown-over fences, using hair dryers to dry out equipment, salvaging tents, and making sure the festival would continue.

The next set of the afternoon, by Old Crow Medicine Show, was moved into the Fairground's indoor multipurpose building. The 1200-capacity building couldn't begin to hold the huge crowd, but the large garage doors were rolled up, outdoor speakers were quickly wired, and as music filled the air, it was clear that the festival would go on. Old Crow put on an over-the-top performance feeding off the energy of the crowd. The Del McCoury Band followed with an abbreviated version of a "bluegrass story" that they had prepared to share with the crowd on the main stage that evening.

As if to put an exclamation point on the fact that Delfest would go on, the production staff had the main stage back up in time for the band Leftover Salmon to finish up the night to a very muddy, but packed, music meadow. Railroad Earth and the Del McCoury Band and friends closed out Saturday night in a packed multipurpose building with the last note of the Super Jam ending about 4 o'clock Sunday morning.

Daylight on Sunday revealed a multitude of folks drying out their belongings and rigging their tents back together. The only interruption of the day was when the Travelin' McCoury's had to shorten their set when lightning threatened.

While the music was phenomenal and Delfest presenters, High Sierra and McCoury Music, can enjoy the fact that the festival's second year saw more than a 50% increase in attendance over the inaugural event, the true story of Delfest is how everyone came together to keep each other safe and to help their neighbors recover from the storm. Delfest's Ning site (delfest.ning.com) is packed with stories of folks offering shelter during and after the storm, sharing dry clothes, helping salvage property, offering food and drink, and on and on. It's also amazing to see how some people reconnected after posting a thank you note to folks whose names they didn’t even know. Those in attendance will never forget the event, and now have lifelong friends who will make the yearly trek to Cumberland, Maryland, to reconnect with fellow festers.

When asked for a comment, Del McCoury simply wanted to say thanks to everyone who pitched in to help. "I was in one of the safest places on the grounds as I happened to be on the bus at the moment, but my wife and other family members were in the merchandise tent with 30 to 40 other folks who stood along the edges and held the tent down, keeping everyone in the tent safe and-less importantly-keeping all of the merchandise dry. As the storm subsided a little I was able to listen in on the radio to the efficiency of the security and site crew as they moved through the fairgrounds making sure everyone was safe. Allegany County's police and fire departments also moved in quickly to aid in the safety effort. It was very moving to see everyone pull together at such a difficult time. I can say I've never seen anything like this and I've been at it for 50 years. I'd like to express my deepest gratitude to everyone who helped out. It's a wonderful feeling to know that the music fans at Delfest are so caring."