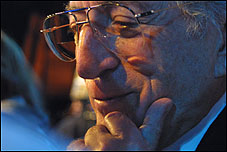 Filmed in front of a live audiences, one of Bennett's personal favorites include his version of Billy Joel's "New York State of Mind" and "How Do You Keep The Music Playing?" Other highlights of the show include Judy Garland's "Somewhere Over the Rainbow" and Fred Astaire's "Steppin' Out."

Intercut with the live performances is on-location footage of Bennett at San Francisco's Golden Gate Bridge, Fisherman's Wharf, the cable cars on Nob Hill — as well as a very special moment filmed at Candlestick Park when the capacity crowd at the stadium sang "I Left My Heart In San Francisco."