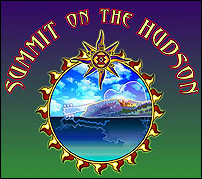 Terrapin Presents is producing the Summit on the Hudson Music Festival May 31-June 1 at Croton Point Park in Westchester County, NY. Artists slated for May 31 include Chuck Berry, Arlo Guthrie, Steve Kimock, Little Feat and Reid Genauer & The Assembly of Dust. The lineup for June 1 Branford Marsalis, Medeski, Martin and Wood, Martin Sexton, and The Radiators. Summit on the Hudson marks Terrapin's return to Croton Point Park, where Gathering of the Vibes, Terrapin's annual multi-day camping festival, was held in 1997.

"Terrapin is thrilled to return to the Westchester County community, where we have had great success with Gathering of the Vibes in the past," says Ken Hays, founder and president of Terrapin Presents. "The diverse mix of artists appearing at Summit on the Hudson offers something for everyone; it is the perfect opportunity for families to come out and enjoy two days of spectacular music. With the Palisade Cliffs and Hudson River as a backdrop, this 508-acre venue is the perfect destination for a pair of day-long journeys with family and friends."

The Summit on the Hudson Music Festival is on the campaign to fight hunger and assist Westchester County's Food PATCH. Through the Terrapin Foundation, the festival wants to give back to the community that is making this harmonious fusion of jazz, folk and rock 'n' roll possible.

Festival attendees are encouraged to bring non-perishables: hot or cold cereal, canned goods, pasta, rice, soups, juice boxes, and tea or coffee. Donation bins will be set up at the entrance gate to Croton Point Park on both days of the festival.

Terrapin also will be throwing a Summit After-Show Party just minutes from Croton Point Park at the Paramount Center for the Arts in Peekskill, NY on Saturday May 31 with The Derek Trucks Band and Reid Genauer & The Assembly of Dust.

MUSKEGON, Mich. (AP) — Derogatory racial remarks from rocker Ted Nugent have cost him a gig at the Muskegon Summer Celebration.

Festival officials canceled Nugent's concert following an interview last week with two Denver disc jockeys in which the DJs say he used slurs for Asians and blacks. The festival was scrambling to find a replacement.

"If we can (replace Nugent) with something in the classic rock genre, that'd be great, but right now we want to get the best possible acts we can find," Summer Celebration President Joe Austin told The Muskegon Chronicle for a story Friday.

Following discussions with community leaders, Summer Celebration's board decided "it was in the best interest of the community" to drop Nugent from the festival lineup, Austin said. The festival runs in late June and early July.

Rick Lewis and Michael Floorwax, morning talk-show hosts on radio station KRFX-FM, stopped the live interview with Nugent on May 5 after they said he made the remarks.

Depeche Mode vocalist Dave Gahan will embark on his first solo U.S. tour in support of his debut album Paper Monsters, due June 3 on Mute/Reprise Records. Gahan will launch the summer-long North American tour July 18 in Atlanta, GA after completing his 22-date European tour. Performing songs from Paper Monsters and various Depeche Mode songs, Gahan will be backed on the road by guitarist Knox Chandler, bassist Martyn Lenoble, keyboardist Vincent Jones and drummer Victor Indrizzo. Gahan wrote all of the album’s 10 tracks with multi-instrumentalist Chandler, whose credits include playing on Depeche Mode’s Exciter, as well as albums by R.E.M. and Siouxsie and the Banshees. Lenoble has played with Porno for Pyros and Janes Addiction; Jones has recorded with Sarah McLachlan and Cowboy Junkies; and Indrizzo has worked with Beck, Macy Gray, The Vines and Liz Phair.

Although Gahan has fronted Depeche Mode for 22 years, Paper Monsters marks his debut as a fully-fledged songwriter. Before now, career commitments, distractions and personal confidence barriers kept him from finding his true voice. “Hence the title of my album,” he says, “because I’d created these monsters which have got bigger and bigger over the years. But in the last few years I realized that it’s only myself that has created them.”

The Great Bamboozle Arts and Cultural Festival Is a Jamband Bonanza

Premiering during the Stone Pony's three-year-old "Re-Birthday" from May 30-June 1 in the Stone Pony and on the surrounding Stone Pony Lot in Asbury Park, NJ, The Great Bamboozle Arts and Cultural Festival is a jamband bonanza designed to unite the best national and local jamband and jam-friendly acts in a three-day celebration of arts and culture. Kicking off a summer season in which jamband festivals are rapidly sprouting across the country, The Great Bamboozle instantly makes the Jersey Shore — and the rest of the Garden State — a "player" on the national circuit.

"The jambands brought out our first loyal fan base after I purchased the club, and we reopened at the beginning of the 2000 summer season," says Stone Pony owner Domenic Santana. "That first year was really tough, but their fans were fearless in trekking where no man would go, and they helped established a regular scene here. And when we needed support during our Save the Pony campaign, those were the fans who came out and marched for us. It's no coincidence that we named our street team the Hippie Army. They have been fiercely loyal."

Tickets are $70 for a three-day pass or $27 for a single day in advance ($30 day of show). Max Cruise Entertainment, the primary concert promoter of the Stone Pony, is a new booking and promotion company in Freehold, NJ, specializing in festivals and events including This Island Earth, The Surf and Skate Festival and the Asbury Music Expo. Max Cruise also is reopening the historic Fast Lane nightclub in Asbury Park on the first weekend in June.

The laughfest will stage a record 72 club performances and more than 290 shows in both French and English. According to Just for Laughs CEO Bruce Hills an extra 12 shows were added this year including "several tailor-made for the industry in attendance. We've got quite a star-studded lineup."

New fixtures this year include: Talk of the Fest," which will showcase the performers who have created the most buzz during the festival onstage in one shot near the close of the festival; "Dating It!" which features single comedians having three-minute dates onstage with audience members; "Confessing It!" an evening of comic testimonials; and the show "Basile: Growing Up Greek in North America."

On The Bricks Now in Third Year in Atlanta

The 3rd annual On the Bricks at Centennial Olympic Park in downtown Atlanta has an eclectic mix of live music this summer. The series is held on Friday evenings. “I'm thrilled about the third season and our ability to bring larger acts to the market place as part of On the Bricks.” comments Mad Booking president Marcie Allen Cardwell. “It's Atlanta’s love for music and entertainment that has supported the rapid growth of On the Bricks in just two short years.”

On the Bricks lineup:

Tickets are priced for each show at $3.00 or 12 tickets for $25.00 with children five and under free. Tickets are not dated and valid for one admission at any show during the season with no re-entry. On the Bricks is sponsored by Cingular Wireless/NOKIA, The Westin, Delta Air Lines, The Atlanta Journal Constitution, WXIA- NBC 11 Alive, CAMA/Comcast, 790 The Zone and Star 94.

Lisa Marie Presley will mark her debut tour when she joins Chris Isaak on a 17-city U.S. tour kicking off on July 11 at the Fleet Boston Pavilion. She will also appear with the Goo Goo Dolls in August.

Presley has been confirmed to perform live at NYC's Rockefeller Plaza on June 20 as part of "The Today Show" outdoor concert series. She will also perform on "VH1 Divas Duets," airing live from Las Vegas on May 22 at 9:00 pm EST. The episode of VH1's "Driven" devoted to Presley will premiere on June 1. Additionally, her special acoustic performance on "AOL Live Sessions" premiered on May 15.

Pop singer Avril Lavigne performed a free concert for students at a high school that won a radio contest.

"I think it's the fact she's our age and being herself," said junior Katie Abramowicz. "Her fame is not based on her looks. She's original in her music and the way she dresses."

The students won the regional High School Spirit Contest sponsored by Buffalo's Kiss 98.5 by collecting about 950,000 index cards with messages for troops in the Middle East.

Lavigne was nominated for five Grammy awards and has sold 4 million copies of her debut album, "Let Go."

Pearl Jam has been working with Conservation International due to its concern about the environment and have offset the greenhouse gas emissions of the tour. Conservation International helped them estimate the direct emissions of the tour including the trucks, buses and airplane that will move the tour through its 30,000-mile route. Furthermore, they have taken the unprecedented step of offsetting the emissions of the estimated 1 million fans driving to and from the shows. These combined sources result in a cumulative impact of 5,700 tons of CO2.

In order to offset the warming potential of these emissions, they have purchased 5,700 tons of Conservation Carbon generated by the Makira rainforest conservation project in Madagascar. This 1400 square mile area represents a store of 140 million tons of CO2 that are at risk of being lost to the atmosphere through fire and logging. The forest is also located in a biodiversity hotspot that is home to thousands of rare and endangered plant and animal species, including three species of critically endangered lemurs. The protection of this land therefore represents a double benefit of both biodiversity conservation and climate protection.

Mariah Carey is in the process of downsizing her upcoming arena tour to more intimate venues and apparently does not mind playing multiple nights at a venue.

A post on Carey's official Web site informed fans to "hold onto your confirmations/receipts as we will be providing additional information shortly." A new itinerary is expected by the end of next week.