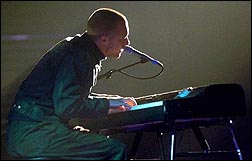 Coldplay has confirmed the first leg of what will be their most extensive North American tour to date. Presented by MTV and kicking off January 21 in Orlando, the first run will hit large halls in 26 cities. Plans are also currently being made for a May/June second leg of North American dates. In addition to their 2003 headline tour, Coldplay is set to return to the States next month for a run of major market Christmas radio shows and a December 16 performance on Late Show with David Letterman.

"Road Less Traveled Tour," 21 more dates have been added for 2003. During the first 24 dates of his tour that finished in November, George played to over 358,000 fans and grossed nearly $19 million in ticket sales.

The winter tour will kick-off in Greenville, SC on January 16 at the Bi-Lo Center and wrap in Louisville, KY on February 28 at Freedom Hall. Epic recording artist, Tammy Cochran will join Strait as his special guest.

With the lone exception of Phoenix, which is a fixed stage ampitheatre, all shows will be performed in the round.

Pseudopod was recently on the road in Colorado in support of their self-titled debut CD.

While in Ft. Collins, on the eve before starting a tour with the band O.A.R., Kevin became ill with terrible headaches and nausea prior to a radio interview.

Seeking treatment at the local medical clinic, a CAT scan revealed that it was a small tumor that would most likely require surgery.

Kevin and the rest of the band immediately returned to Los Angeles for treatment to have the tumor removed. A five-hour operation on Kevin soon followed.

Carlberg is recuperating at home and will most likely need radiation and chemotherapy treatment following the procedure.

As a result, Pseudopod has canceled their tour dates with O.A.R. Meanwhile, Carlberg is in good spirits and is determined to make a full recovery.

KORN has been forced to cancel the five remaining U.S. dates on their North American Pop Sux! tour due to the strained vocal cords of KORN lead singer Jonathan Davis, who was advised by his vocal coach and doctors to cut the tour short.

Not wanting to disappoint their Canadian fans,
the group is going ahead with their two Canadian shows: December 4 at the Air Canada Centre in Toronto and December 5 at the Bell Center in Montreal.

These are rescheduled dates from the first leg of KORN's U.S. trek earlier this
year.

Three Tenors' have postponed their Jan. 5 concert with the Columbus Symphony Orchestra because Luciano Pavarotti's girlfriend is expected to give birth to twins that week.

Their performance was rescheduled for Sept. 28, promoters said Tuesday.

Pavarotti, Jose Carreras and Placido Domingo have schedules that do not allow much mutual availability, promoters said.

"The concert will go on in the same form and fashion as originally planned," said Ruth Milligan, a spokeswoman for the orchestra. "Only the date has been changed."

The Three Tenors performed together only twice last year and have only two scheduled concerts this year. The next one is Dec. 16 in St. Paul, Minn.

Concertgoers holding the tickets for the Jan. 5 performance at the Schottenstein Center can use them Sept. 28 or get refunds, beginning Monday, from where they were purchased, promoters said.

Pavarotti, 67, has been living with Nicoletta Mantovani, 32, since 1996. He has three children from a previous marriage.