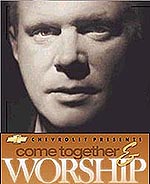 Christian music pioneer Steve Camp issued a four-page "open letter" to the Christian music industry on November 1 entitled "Chevrolet and the Word of God: An Open Letter to the CCM Community from Steve Camp."

"This is not the place for the world to conduct their business," writes Camp. "The fact that this is an 'evening of worship and evangelism' — their language, not mine — means that we have now actually digressed to charging people money to worship the Lord."

Camp issued his letter after comments he had made on an Internet forum for Christian radio programmers were distributed without his knowledge to industry leaders and the trade paper Radio & Records.

The letter can be viewed in its entirety at www.stevecamp.org/pages/7/index.htm.

The band is scheduled to resume the second leg of its U.S. tour in Cincinnati on Tuesday night.

General floor admission, also called festival seating, will return to the U.S. Bank Arena for the first time at a rock concert since the city banned the practice after a fatal stampede decades ago.

Eleven people were killed on Dec. 3, 1979, during a crush to get the best seats for a concert by The Who. Police agreed to a one-time variance for the Springsteen concert that will include security and safety measures.

The highly successful "American Idol" tour has produced at least one curiosity. Kelly Clarkson was the winner of the television show and obviously the star of the tour; however, she is not performing her single "A Moment Like This" on the tour. Instead, she is singing its B-side "Before Your Love" and two r&b standards "A Natural Woman" and "Respect," both from the Aretha Franklin songbook.

The New York Times reports that an executive involved with the tour said the omission of her hit single was to hold it back for inclusion in her likely solo tour in the spring. The Times also reports that a spokesperson for her manager Simon Fuller denies that the song was being withheld to spur sales of a solo tour.

Ticket sales have not been hurt by the omission of the song, but fans are bewildered.

Police used pepper spray to disperse the crowd surging around GM Place Thursday night. There were no reports of injuries.

A band spokesman said bad weather in Los Angeles held up Rose's flight to Vancouver. The band practiced without him Wednesday.

The spokesman said a concert scheduled Friday at the Tacoma Dome, about 30 miles south of Seattle, would go on as planned.

Thursday's trouble began when the doors didn't open as scheduled at 6:30 p.m. Tempers flared when the cancelation was announced about an hour later.

Within 15 minutes, the crowd turned into an angry mob that smashed some GM Place windows.

Police and stadium security tried to move the crowd away from the broken glass, and ordered fans to disperse after a Roman candle was fired toward the officers.

The performance was to have been the first in the North American leg of the band's Chinese Democracy World Tour.

Def Leppard is set to return to the concert trail in December playing a mix of theaters and arenas. This marks their first national tour in more than three years.

Britney Spears' first pay-per-view concert, "Britney Spears in Concert" will air on November 23 at 8 PM ET. The concert was filmed at London's Wembley Arena as part of her first world tour, November 23, 2002 at 8:00 p.m. ET. The suggested retail price is $19.95.