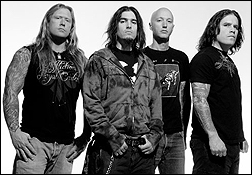 ORLANDO (CelebrityAccess MediaWire) — In an effort to maintain their "family friendly" reputation, Disney has canceled not one, but two Machine Head dates that had been scheduled for the House of Blues in Orlando and Anaheim.

According to a post on their website website, the band asserts that Disney, after an "internal review process," pressured Live Nation into the cancellation, citing the band's use of "citing violent imagery, undesirable fans and inflammatory lyrics as the reason." They also claim that the cancellation is part of a "blanket rule" banning acts who's performance may contain controversial material, including band names.

The Machine Head post went on to say that the cancellations occurred after "intense pressure and vague threats of liability."

Machine head has been on the road with Arch Enemy, Throwdown and Sanctity on the Black Tyranny Tour. The Orlando show has been re-booked for Club Firestone while the September 7th Anaheim show was moved on one day's notice, by a seemingly herculean effort on the part of Live Nation's Paul McGuigan, to the The Glass House in Pomona. Both the HoB club in Orlando and in Anaheim are on Disney property. None of the other Black Tyranny Tour dates at LN venues have been cancelled at this time.

Representatives from Live Nation and Disney were not available for comment at the time of publication. – CelebrityAccess Staff Writers