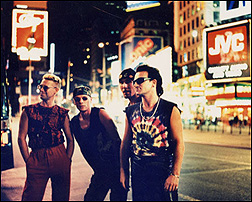 All the hoopla with U2 appearing on NBC-TV during halftime of the first game of the NBA Finals between Los Angeles and Philadelphia on June 7 was a lot of hot air.

The Irish rockers, appearing at Boston's FleetCenter, performed "Where the Streets Have No Name" live, and after a commercial, NBC showed a taped performance of "Elevation," which appeared to be the concert's opening number.

After the game, when all the action was turned over to CNBC for the post game coverage, they kept promoting another U2 song. However, the taped version of "Beautiful Day" was never shown. The cable station never even mentioned they ran out of time due to the overtime game.