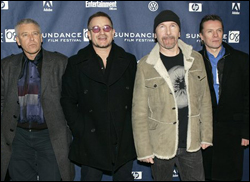 LOS ANGELES (CelebrityAccess MediaWire) — Irish rock band U2 made a killing in the stock market after they moved to sell the 1,556,386 shares in Live Nation stock. U2 acquired the shares as part of the 12-year 360 deal they signed with Live Nation in March of 2008.

At the time, the company touted the stock holding as evidence of the band's faith in the business model. As a part of the agreement, Live Nation guaranteed that the band would receive at least $25 million for the stock. Unfortunately for Live Nation, their share price has dipped precipitously in recent months and company's shares were trading at $3.80, clearing just under 6 million, leaving the promoter holding the bag for the remaining $19 million.

Despite the sale, the U2's manager took pains to restate the band's commitment to the pact. "We're very much in business with [Live Nation] and we're planning to tour in 2009." Paul McGuinness, the band's manager told the Wall Street Journal.

U2's deal with Live Nation has yet to be very profitable for the promoter as the band hasn't toured since 2006. The Irish rockers have stated that they plan to release an album next year with aforementioned tour to follow and the band has a proven track record of moving tickets so it remains very likely that Live Nation will still post a profit from the U2 deal in the long-term.

Unfortunately, however the other shoe may be ready to drop for the promoter in April, as Madonna becomes eligible to sell the $25 million in stock holdings she acquired from her own 360 agreement with Live Nation. Unlike U2 however, Madonna has been an earner this year, pulling in more than $120 million (and counting) from her "Sticky & Sweet" tour.

Live Nation CEO Michael Rapino tried to offer some perspective to the sale, noting to the WSJ that "Madonna and U2 are the only two deals that did contain this provision. The Madonna business is great, and we look forward to monetizing our investment in U2 next year."