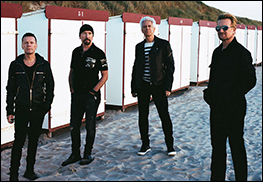 LONDON (CelebrityAccess) — U2 is on line to perform at a free concert in London's Trafalgar Square as a part of MTV's Europe Music Awards festivities.

The Irish rockers will perform on Saturday evening, ahead of the awards show on Sunday night. The band is on hand as they will be honored with MTV's global icon award at the awards ceremony.

While the 7,000 tickets for the show are free, they are being distributed via a ballot which can be entered via their website. The ballot went live on Monday and will end by Tuesday at 12AM, GMT. Some of the performance will be broadcast during the awards ceremony on the following night.

The Mayor of London, Sadiq Khan, today welcomed the special MTV Presents Trafalgar Square event. He said: “London is one of the live music capitals of the world, with an unrivalled music heritage. It is fantastic to host the EMAs in our city for the first time in 21 years. I’m delighted that Trafalgar Square will host this special MTV Presents performance – an iconic venue for an iconic band.

“I have been saying, loud and clear, that London is open to talent, creativity and business. What better way to showcase this than one of the world’s greatest rock bands performing to Londoners from all backgrounds, for free, in the heart of our great city?”