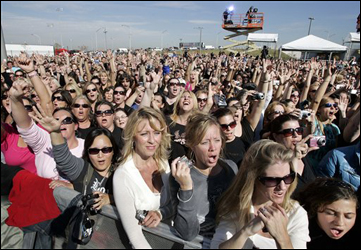 East Rutherford, NJ (AP) — Rock band Bon Jovi announced plans Thursday for a new world tour that will swing by the new home of the New York Giants and Jets.

The two-year tour begins Feb. 19 in Seattle and includes a May 26 show at New Jersey's new $1.6 billion Meadowlands football stadium, which will be home to the New York Giants and Jets. It will feature 135 shows in 30 countries.

"It's a big world," lead singer Jon Bon Jovi said when asked about the length of the tour. "And we still make house calls."

Bon Jovi and lead guitarist Richie Sambora are New Jersey natives. They said being selected for the first concert at the new stadium holds special meaning for them because they've played Giants Stadium more than eight times and consider it home.

Bon Jovi said going to a football game at Giants Stadium was a special event for him before the band, which formed in 1983, made it big. The Grammy winner grew up in Sayreville and is a Giants season ticketholder.

"I can't wait until there's a ballgame," Bon Jovi said.

The band announced the tour Thursday at an invitation-only performance for 5,000 fan club contest winners and construction workers in the parking lot of the new stadium.

A group of police officers watched the show from a highway overpass as the band worked through a set that included songs from its new album "The Circle" and hits like "You Give Love a Bad Name."

Kim Cardino, 42, of Lindenhurst, N.Y., blew a kiss to the band's sport utility vehicle as it left the parking lot after the show.

"Just in case he's inside," Cardino said as her husband and three daughters looked on. "I love Bon Jovi. I wasn't close enough."