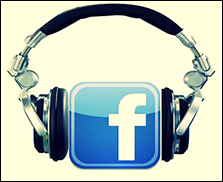 MENLO PARK, CA (Hypebot) – The term "game changing" is overused, but Facebook launching a music service would deserve the descriptor. Tens of millions consuming music on the same platform that they share their likes and dislikes gives new meaning to the term viral.


In a statement to Billboard, Facebook said it has "no plans to go into music streaming." Of course, that does not mean they are not behind the scenes talks; nor does it deny the more persistent rumor that the social media giant will begin monetizing music videos soon.


Facebook is in high level talks with record labels to launch a music streaming service, according to multiple sources.


First up will be monetizing and shoring revenue for the music videos already on the site with a new ad program already available to major consumer brands. An outside tech firm is reportedly working with Facebook to create a system much like YouTube’s Content ID that enables labels and creators to manage and monetize video content.


“It’s a mass land grab. Facebook going into the video space was always going to be an enormous, ambitious land grab and no doubt something they’ve been planning for some time as the potential income from ad revenue will be incredible,” a source told Music Ally. “On Facebook’s move into monetized video, all of us could see it coming for months,” said another. “We have all been really utilizing it in internal testing. It is way, way ahead of YouTube.”


While its just a matter of fine tuning before Facebook's music video offering launches, plans for a streaming music service are in the early stages. The labels want YouTube to get video right first.


But with billions in the bank, Facebook could easily just buy an existing music streamer and incorporate it onto its platform. The thought of a big payday from a Spotify purchase likely excites the major labels, who each own a stake in the company.


But a more likely acquisition is a far less expensive competitor like Rhapsody, Rdio or dare we say… TIDAL?