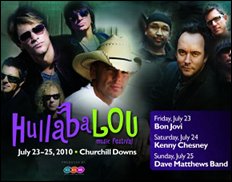 LOUISVILLE, KY (CelebrityAccess MediaWire) — HullabaLOU has been in planning and preparations for two years, and tomorrow is the big night.

The festival will feature 5 stages, more than 65 bands and, unfortunately, a whole lot of heat.

During a summer when high temperatures and live music have proved to be a dangerous combination for festival goers, HullabaLOU is attempting to prepare for the weekend’s events.

Thousands of fans are expected to swarm the Churchill Downs grounds to take part in what organizers hope will eventually be one of the nation’s largest music festivals.

However, amid the buzz for opening night is the impending threat of a weekend of weather forecasted to reach temperatures in the mid 90s, with heat indices topping 100.

Organizers are focusing on efforts to keep fans safe from the heat this weekend with a myriad of precautions.

Against the tradition of forcing festival goers to sacrifice outside beverages upon entry, HullabaLOU is allowing fans to bring two 20 ounce sealed bottles of water into the infield which they are invited to refill throughout the day.

The third floor clubhouse, which is air conditioned, will also be open to ticket holders for the duration of the festival.

Additionally, the festival has set up a “Chill Zone,” which can handle upwards of 15,000 people.

The Chill Zone provides a high pressured mist set behind fans which reduces the effects of the blazing heat.

Kenny Chesney, Bon Jovi and the Dave Matthews band will kick off the festival Friday night. –by CelebrityAccess Staff Writers