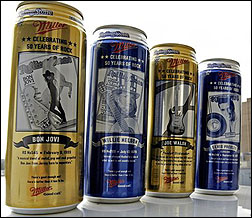 (CelebrityAccess MediaWire) — In response to the current concerns expressed about the lack of inclusion of African-American artists on the commemorative can series honoring the past half century of rock 'n roll, Miller Brewing Company has issued the following official statement:

Miller Brewing Company sincerely apologizes to the African-American community, to music fans and to our valued consumers for this occurrence. African Americans obviously have played a formative role in the development of rock 'n roll, and despite our efforts, we did not manage this component of the promotion appropriately.

The commemorative cans promotion was one part of a multi-pronged campaign, executed in partnership with Rolling Stone magazine, which includes several events and promotional activities that prominently and proudly feature African-American music artists. Other aspects of the promotion that began in May are:

— An upcoming two-day concert, featuring James Brown, Bo Diddley,
Wyclef Jean and Lenny Kravitz, among others, that is the culmination
of the summer-long promotion;

— A free guide to this summer's hottest music events, which included a
variety of African-American artists;

— A digital music giveaway, in partnership with Napster, that included
an African-American component titled "The Summer of Non-Stop Hip Hop;"

— Print advertising in Rolling Stone that prominently represents
numerous African-American musicians from throughout the years;

— A major advertising presence in Rolling Stone's "Immortals," "Moments"
and "Photos" special issues celebrating the history of rock and roll.
Rolling Stone is building on its long history of recognizing the
pivotal influence of African Americans in rock by featuring many of
the most influential African-American artists in these issues.
For example, six of the top 10 "Immortals" are African-American; and

— Print ads in Rolling Stone and African-American media around the
country, after the New York concerts, featuring the artists who
performed and talking about the critical importance of African
Americans in rock and roll.

By making the public fully aware of the breadth of our plan, which does include tributes to black music artists, Miller Brewing Company reaffirms its ongoing commitment to the contributions of African Americans to American culture.

Virgis Colbert, Miller's executive vice president of worldwide operations, said: "We took a hard look at the situation and realize where we fell short. You can count on Miller to step up." –Bob Grossweiner and Jane Cohen