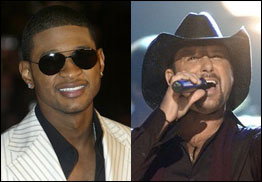 (CelebrityAccess MediaWire) —
Usher, Tim McGraw and Kanye West came out on top in the marquee categories in VH1's 3rd annual Grammy Awards poll of adults 18-49. VH1 commissioned a telephone poll of a random national sample of 470 men and women between the ages of 18 and 49 and asked who they thought would take home Grammy Awards for Album of the Year, Record of the Year, Song of the Year and Best New Artist. Respondents were also asked if they had purchased music by any of the Best New Artist nominees.

The VH1 poll's most intriguing findings include:

** Usher was far and away the biggest winner for Album of the Year and
Record of the Year, outpacing the nearest competitor by at least a 2-1
margin in both categories;

** This year's breakout hip-hop star, West, barely edged out Maroon
5 and Wilson in the Best New Artist category; and

** West and Maroon 5 might be positioned for long and successful
careers in the music industry. Among the Best New Artist nominees,
respondents were most likely to own records by these two new acts.

"As we found in last year's VH1 poll, America still loves urban and hip hop music. Country superstars pop on the music radar, too," said Rick Krim, executive vice president, music and talent, VH1. "But consumers' tastes and those of the music industry voters often differ, so we'll have to wait until Sunday the 13th to see who actually will take home the Grammy."

The overall VH1 Grammy poll results for those who had an opinion are as
follows:

Album of the Year rankings:

Record of the Year rankings:

Song of the Year rankings:

Percentage of respondents who have purchased music by a Best New Artist
Nominee:

This VH1 poll was conducted by telephone January 14-18 among a random national sample of 470 adults 18-49. The results have a 4.5% margin of error. Field work was done via the weekly Express omnibus survey, operated by TNS of Horsham, PA. –Bob Grossweiner and Jane Cohen