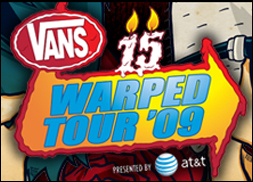 VENTURA, CA (CelebrityAccess MediaWire) — Vans Warped Tour Presented by AT&T has announced a special after-party in downtown Ventura on Sunday, June 28 directly following the Vans Warped Tour show at Seaside Park in Ventura, CA. The one-night-only event will transform downtown Ventura into a Vans Warped Tour playground featuring a live performance from punk icons FEAR, followed by the movie premiere of National Lampoon Presents Endless Bummer (shot on location in Ventura). The night will also feature a dance party at The Watermark featuring DJ Kamtin Mohager aka The Street Gang of 1974 (with back-up band 3Oh!3), a private VIP party at upstairs at W20 Lounge (Watermark On
Main) and public parties at local clubs Sans Souci, RooKees and The Good Bar, live performances from Blackheart Records' The Dollyrots as well as The Action Design (who are featured on the Endless Bummer film soundtrack).

Endless Bummer was Executive Produced and co-written by Vans Warped Tour producer and founder Kevin Lyman and will be released on DVD by National Lampoon in Fall 2009. The film chronicles 24 hours in the life of a group of teens contemplating what life will hold for them after high school. The thought of leaving the sun-drenched beaches of Ventura, California–"where beer, bongs and bikinis rule"–is temporarily banished when catching a wave turns into catching a surfboard thief from the much-despised "Valley." Golden boy J.D. (Khan Chittenden, In Her
Skin) and "stoner" Lardo (Ray Santiago, Meet the Fockers) rally their friends one last time, with the guidance of the mystical Dell (rocker Joan Jett) and veteran surfer Mike Mooney (Matthew Lillard channeling "The Big Kahuna"). The hunt is on!

Following is the complete track listing for the Endless Bummer soundtrack:

1. Bad Reputation (performed by The Dollyrots)

3. Destination Unknown (performed by Joan Jett and the Blackhearts)

5. Ghost Town (performed by The Aggrolites)

7. I'll Do You (performed by The Action Design)

9. Pass the Dutchie (performed by The Aggrolites, featuring General
Smiley)

10. Monster (performed by Raging Arb and the Redheads)

11. Chamber of Hellos (performed by the Action Design)

12. We Got The Neutron Bomb (performed by The Briggs)

13. Use Your Love (performed by Katy Perry)

The Vans Warped Tour Endless Bummer June 28 after party schedule of events is as follows:

11pm After parties and live performances at the following
locations: