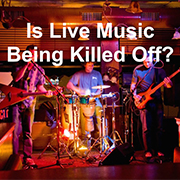 (Hypebot) – Bar and club owners are becoming increasingly upset at the performing rights organization BMI, which they feel is imposing unfair mandatory fees on venues, the cost of which BMI is liable to increase at the drop of a hat.


Bar owners across the country are getting more up in arms at what they claim is BMI's "take-it-or-leave-it" fee structure and canceling music events as a result, according to an article in phillymag.com.


Every public establishment, whether it's a bar, coffee house or restaurant, has to pay the performing rights organizations (BMI, ASCAP and SESAC) if they want to have music playing, whether it's live, radio, or a jukebox.


The problem is, according to many bar and club owners, that BMI imposes what seems like a random fee that could rise at any time without a cap. If they don't pay, then BMI's deep pocket attorneys take the owner in court, which most bar and club owners just can't afford.


No one argues that the songwriters and publishers shouldn't be paid, by the way. It's just how they're being charged that's at issue.


The big problem here is that everyone loses when a venue stops having live music, so this is something that both sides should work diligently to sort out.