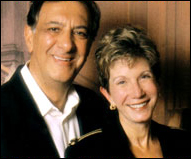 TAMPA (CelebrityAccess MediaWire) — Florida promoter Richard Nader passed away on December 1st due to complications from his battle with Parkinson's disease.

Nader produced the first "Rock & Roll Revival" concert at Madison Square Garden Felt Forum's Felt Forum in 1969. The success of the event led to the show being moved to the main room and the concerts went on to be venue's most successful concert series, with 21 out of 25 shows and ticket sales in excess of 400,000.

The show found similar success touring under the aegis of the "Rock & Roll Revival Spectacular" which hit 80 US cities and 40 colleges along with two runs in Las Vegas. The shows also helped to spark the "Rock n' Roll Revival" a backlash against the British Invasion that saw a revived interest in "oldies" artists and styles.

Nader went on to produce numerous other successful tours and festivals over the years and won Billboards' "International Promoter of the Year" in 1976.

"It is due to Richard’s vision and foresight that we enjoy the music of the 50's and early 60's today. He will be greatly missed by those who loved him and those who were touched by his passion and dedication to the music of the era." Richard's wife Deborah Nader wrote in an email. – CelebrityAccess Staff Writers