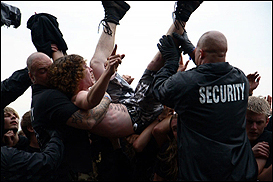 WACKEN (CelebrityAccess MediaWire) — German metal label Wacken Records has announced that they are partnering with Hanoverian metal imprint SPV to cooperate in the marketing, promotion and worldwide distribution sectors. The deal will see Wacken, formerly known as Armageddon Music incorporated into the SPV system, giving it stronger international marketing and distribution options while still retaining its independence.

SPV is a major label in the metal world, serving as a home for acts such as Whitesnake, Motörhead, Saxon, Iced Earth, Helloween and Type O Negative on its roster while Wacken brings acts like Rose Tattoo, Victory, Onkel Tom Angelripper and Holy Moses, among others, and newcomers Suidakra and Forever Slave into the cooperation.

"This cooperation contract is our reaction to the shifts that have taken place in the market, focusing the strengths of SPV and Wacken Records, in association with Metaltix and ICS. Our cooperation will produce new marketing structures for young bands to break into the world of heavy metal." Olly Hahn, International Product Manager at SPV said.

"The aim of the Wacken Open Air festival, alongside ICS with its Wacken Road Show and the Metal Battle concept, has always been to bring metal music to the world. This is why we are permanently looking for strong cooperation partners for our label. In SPV, we have found a company with a great wealth of experience and willingness to try unconventional paths, which complements Wacken Records perfectly. This joint venture will consolidate the continuation and emphasis of our strengths." said Wacken's Thomas Jensen.