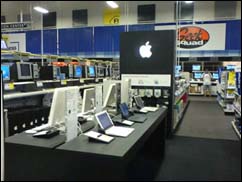 Mega retailers–Wal-Mart, Best Buy, Circuit City, Target, etc.–now have 65% of the market for downloads and printed music CDs. And these big retailers can no longer sell CDs at list prices of $15.99 and up, notes a report in the Wall Street Journal. Best Buy VP Gary Arnold told the paper that consumers think of CDs as $10 commodities. Big-box chains say they're trying to give customers what they want. "We also are making changes to the CD selections in our stores to reflect customer preferences in each market," says a Wal-Mart spokeswoman.

Industry leaders in this print market include Cinram, which took over the former Sony media production business, and MeadWestvaco's AGIMedia.

The WSJ reported that Music executives — and not just those who traffic in obscure genres — are in an increasing bind when it comes to selling their wares on CD. As dedicated music stores, including Tower Records, have closed up shop by the thousands, big, generalist chains like Wal-Mart, Target Corp. and Best Buy Co. have tightened their already firm grip on the sale of physical CDs. The chains order huge quantities of some titles, while other releases find it hard to get a foothold.

In past decades, deejays and music critics helped shape musical trends. Today, many music industry executives agree, the big boxes have become the new tastemakers. Even as compact disc sales fall, their choices dictate which CDs are widely available on store shelves across the U.S. Big boxes are the industry's biggest distribution channel — and the rock, hip-hop, jazz and classical music titles they choose not to carry face drastically reduced chances of reaching mass audiences.

But some labels worry that the big boxes are becoming even more restrictive in what they carry. That's partly because, with CD sales falling steeply, the discs aren't as hot as other products the stores sell. Also in the wake of the Don Imus controversy, the debate over the lyrical content of rap, rock and pop has flared up again. Oprah Winfrey recently has focused on rap lyrics on her talk show.

The WSJ also reported that Wal-Mart, for example, has long refused to carry any album bearing a "parental advisory" label warning of lyrics that are potentially inappropriate for minors. As a result, major record labels typically create sanitized versions of albums for sale there and at other sensitive retailers. People in the music industry, however, say some hip hop and rock albums can be difficult to sell to the big chain — even if the releases lack controversial content. "Even Target's getting more difficult," says Jeff Rabhan, a talent manager who has pop and hip hop clients. "Especially with everything that's going on right now with Imus and Oprah, it is becoming increasingly difficult to get hip hop records prominently displayed and even in some cases stocked," Mr. Rabhan adds.

The chains tend to emphasize fast-selling hits that move tens of thousands of units a week. A typical Best Buy stocks 8,000 to 20,000 different music CDs titles, according to Gary Arnold, the chain's senior vice president for entertainment. Some chains carry even fewer titles. By contrast, the biggest of the defunct Tower's 89 locations carried more than 100,000 titles. (Tower still has some online operations.)

It's not just classical music and jazz that have trouble making it into the big boxes. Up-and-coming pop, rock or hip hop acts are unlikely to be welcome until they are proven sellers. And back catalog titles are also feeling the squeeze; even the Beatles are frequently represented in big chain outlets by just one or two albums. That means there are fewer places than ever to buy any CDs but the newest, most heavily promoted titles.

Recently, Wal-Mart has quietly circulated word to major-label distribution executives that it will reduce the space devoted to music, perhaps by as much 20%, in hundreds of its stores. Some record label executives say they have heard similar warnings in the past that have not materialized.

Managers and lawyers who work with record labels say that partly as a result of the big-box squeeze, labels have become more conservative in the kinds of artists they are willing to sign.