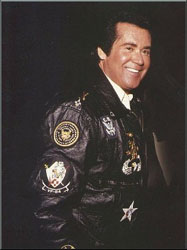 "Wayne Newton epitomizes the patriotic and selfless support that America's sons and daughters in uniform should expect of the American people," said Gen. John H. Tilelli, Jr., president/CEO of the USO. "We're proud to have him leading our celebrity team."

Newton has already enlisted the support of several leaders in the entertainment community to serve as members of an Executive Committee of the USO Celebrity Circle, including Bill Cosby, Tom Hanks, Quincy Jones and Sherry Lansing.

Newton has a longstanding history and commitment to the USO, having first performed in a USO singing troupe at age eight, which performed for Pres. Harry Truman. He returned to the USO stage during the Vietnam War in 1966 and 1968. He has made subsequent USO trips in 1983 and 1987.