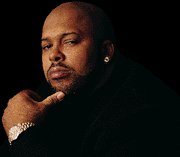 With the introduction of new ideas, a record of progress and challenging points of view, the first West Coast Hip-Hop Summit
accomplished its goals to convene and unite the diverse voices within the hip-hop community. Organized by Hip-Hop Summit Action Network President Minister Benjamin Muhammad to facilitate constructive dialogue between and among the West Coast hip-hop leaders, the over-capacity crowd at the Four Seasons Hotel in Beverly Hills drew such luminaries as Hip-Hop Summit Action Network Chairman Russell Simmons; LA ex-gang leader, conflict resolution activist and record producer Michael Concepcion; national radio and television personality Steve Harvey; Death Row Records CEO Suge Knight; the RIAA's Suzan Jenkins; Bay area radio personality Davey D; and hip-hop artists Kurupt; Xzibit; DJ Quik; Mack 10; the D.O.C.; Irv Gotti; the Outlawz; Queen Pen; Keith Murray; Ed Lover; the Fatcats; the Eastsidaz; M.O.T.; Michel'le and Boo Ya Tribe. "A Summit is where diverse forces come together and that's what you saw today," commented Minister Benjamin on Thursday. "You saw the compassionate side and the raw side of hip-hop. You saw the focus on economics and the side that focuses on social transformation. And it's all good because it makes up the diversity of the hip-hop nation."

Added Michael Concepcion: "You had some of the most serious kids from the streets representing for the industry. These were mortal enemies sitting together. But this wasn't about being a gang member; these kids came in with a business mind. For them to listen and bite their tongues was a feat in itself. They ARE the reality of what the rappers rap about."

"The Hip-Hop generation has the real power, but in order to realize your true potential you must do what is right not just what is popular," the Honorable Minister Louis Farrakhan said in the Hip-Hop Summit's Keynote Address. Referencing the experiences of "black, brown, yellow and the poor white in America," Minister Farrakhan challenged the hip-hop artists in attendance to 1) take responsibility for their music and lyrics and to use them for progressive, social change 2) arouse the thinking of all young people around the world to be peacemakers and not to become pawns in unjust wars and 3) remind everyone that adversity is the mother of creativity. DJ Quik, stirred by the Minister's speech, wrote the following: "I was moved by the Minister's glow (natural flicker). I hope we keep this real. 'Adversity IS the mother of creativity.'"

There was an obvious continuity between this West Coast Hip-Hop Summit and last June's National Hip-Hop Summit in New York. As a result of responding to the theme "Taking Back Responsibility," Minister Muhammad pointed to the growth in speaking the truth reflected in rap songs, videos, poetry and other art forms. "I have noticed an since last June an evolution in the lyrics. Look at DMX in his latest joint, 'We Don't Know Who We Be,' where he talks about his pain and his suffering. He came up with this phenomenal lyric-now being played all over radio-about people who live in poverty having hope. I've seen young people in impoverished situations utilize hip-hop to do better in school and to take better care of their family. Or Nas', "All I Need" (???) where he raps: "All I need is one mike, one God, one family."

The following are the results of the closed-session discussions:

· Political Empowerment: Agreement was reached with representatives of Rap The Vote and the National Black Youth Vote Coalition to focus the energy and the talent of the hip-hop community on a massive voter's registration and education drive. In addition, the attendees to the Summit pledged support for the ongoing development of the Hip-Hop Political Action Committee and the increase efforts in lobbying members of Congress on issues important to the hip-hop community.

· Hip-Hop Responds to Federal Regulatory Agencies: A unanimous vote was taken by the Summit participants to support the Hip-Hop Summit Action Network's efforts to assist spoken-word artist Sarah Jones in her lawsuit against the Federal Communications Commission. The FCC had issued a fine against KBOO-FM, a Portland, Oregon community radio station that played the Sarah Jones song, "Your Revolution," a piece that uses references from male rap lyrics to denounce misogyny and the degradation of women in a lot of popular hip-hop songs.

· Economic Empowerment: Suge Knight made a proposal for the creation of a hip-hop and R&B artist union which would be organized to insure health care, pension, retirement funds and other benefits for the artists. The measure was not voted on but widely discussed.

"There was passionate drama and there was emotion, but there were people who said the West Coast Summit couldn't take place. Well we did come together in that room for hours and hours and reached a consensus on how we are going to work together and how we are going to move forward to the National Summit. I want to make it known that we at the Hip-Hop Summit are accomplishing something, and we are consistently moving forward. It's not just a lot of talk. We make promises to the hip-hop community and we are living up to them," concluded Russell Simmons.