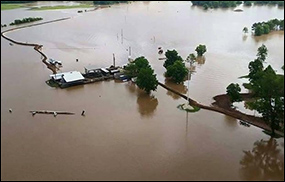 COLFAX, LA (CelebrityAccess) — Southern rockers The Kentucky Headhunters and Louisiana Swamp Jockey were both unable to perform as scheduled after festival the Louisiana Mudfest was interrupted by a levee breach.

The Kentucky Headhunters were scheduled to perform a full concert in support of their new blues album, Meet Me In Bluesland at the 400-acre Colfax Mudfest Recreational Park in Colfax, Louisiana at 9 p.m CT. However, severe rains and a wind storm prevented the show from taking place.

"After the storm we made the decision not to take the stage, fearing for the safety of the audience, local help and our own crew and band," said Richard Young, The Kentucky Headhunters. "We just knew it was too big of a risk for the show to go on."

The rains also put a serious load on a temporary, private levee that had been built a few weeks prior in order to protect it from the rising Red River. According to the Grant Parish Sheriff's Office at KABT-TV, a sheriff's deputy noticed that the levee was cracking, and began moving concert-goers to higher ground. Within minutes, the levee was breached and the MudFest grounds were severely flooded.

Thanks to the quick work of the deputy, most concert-goers had been moved to safety by the time the levee breached, but the Associated Press reported that wildlife agents, troopers, sheriff's deputies and the Army National Guard used boats and helicopters to rescue 113 people who were trapped by the rising waters. – Staff Writers