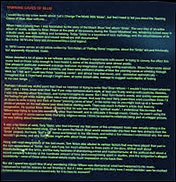 (Hypebot) – In the old days, consumers of music were able to flip through liner notes of an album in order to ascertain precisely who was behind their favorite tracks. Now, after a digital hiatus, new technology could once again make this information, plus more, easily accessible once again.

Until about fifteen years ago, it was fairly easy to tell who had produced, recorded, and mastered an album — just flip through the gatefold or booklet and you’d be able to find all the information you needed. Granted, not all that many fans took this step, but plenty of artists found the producer who changed their careers or the recording engineer who defined their sound through this old-school method. Since the rise of digital distribution, this information has been harder to come by — and while in some cases it can be found on artist websites or Wikipedia pages, it’s often nearly impossible to track down.

That’s a shame, because making that information readily available to the public is vitally important for the creatives who shape albums behind the scenes. Sure, those producers and engineers, as well as the studio musicians, are still getting paid for their time, but they’re missing out on the recognition they deserve. Not only that, the lack of a public record makes it harder for them to build careers and connect with other artists – some recording engineers have made the jump to LinkedIn to share the projects they’ve worked on, but it’s by no means standard practice.

New technology that allows users to see all this information has the power to change this. Not only can it make this data more widely available to fans and other artists, but it can also help keep track of items that the old liner notes of yore could only imagine. For instance, there are programs that allow data about recording and production to be entered and uploaded to a database directly from the studio, potentially averting conflicts over royalty splits and disagreements over who exactly did that behind the console.

Cleaner production data will also help those producers and studio musicians get paid on time, no small matter in an era when studios are closing their doors and musicians are having a hard time making ends meet. While so much of the music data currently available is incomplete or incorrect, better information about everyone who was involved with a piece of music means that they can all shar

Creating A System That Works

The first part of making all this happen is creating a system that works for everyone and ensures a clean flow of information into the database. Once something is in place that can be widely used, then it’s up to the artists and producers to make sure everything is entered correctly so the right people can be credited. It’s not a foolproof system and never can be — there will always be disagreements over creative vision or hazy late nights that lead to data never making it into the system. But as long as there is something good in place that has buy-in from everyone, from engineers to artists to labels to streaming services, that’s a great start. Future generations might never know how much fun it was to flip through a booklet and decode liner notes, but they’ll at least have complete access to the information about the people who made the music happen.