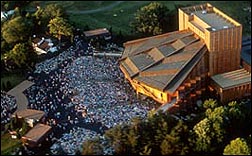 VIENNA, VA (CelebrityAccess) — A woman has been charged with assault after allegedly punched and spit on a police officer during a concert at the Wolf Trap National Park for the Performing Arts in Vienna, Virginia.

According to Washington NBC affiliate NBC4, Edie Toupe was attending a concert by Ben Harper & The Innocent Criminals and Gill Landry when an usher requested to see her ticket. Toupe allegedly refused to show her ticket and the usher called U.S. Park Police, telling them that Toupe was no longer welcomed in the venue.

She has been charged with assaulting an officer engaged in official duties. – Staff Writers