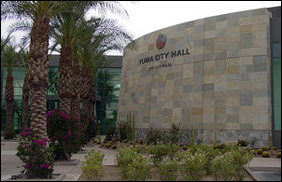 YUMA, AZ (CelebrityAccess MediaWire) — Yuma voters have voted to reject plans for the city to fund the construction of a new $53 million public arena that was a cornerstone of the city's plan to recast itself as an up-and-coming metropole.

Some votes are yet to be counted, but the measure appears to have been defeated by a comfortable margin with nearly 55% of voters expressing discontent with the plan, known as prop 400, the Arizona Republic reported.

The proposition called for the construction of a 6,000-seat sports and entertainment center that would be managed by Phoenix-based Global Entertainment Corp and would have tried to lure minor league soccer, hockey and arena football franchises to Yuma. The center would also play host to concerts, public meetings and other events. Most voters however, seemed to be concerned about the cost of financing such a facility in troubled economic times.

"They were building something that wouldn't pay for itself," answered Jack Kretzer, treasurer for a local advocacy group.

Among the factors contributing to the defeat of the plan was the revelation by critics of Prop. 400 that Security and Exchange Commission records indicated that Global Entertainment had lost $8.1 million in the last two years and was in the midst of "severe economic strife."

The defeat likely doesn't spell the end of plans to bring an entertainment complex to Yuma but supporters told the Republic that its probably "done for at least a year or two."

"As long as it's publicly funded, it's just not going to fly." opposition organizer Tom Kelly told the Republic. – CelebrityAccess Staff Writers