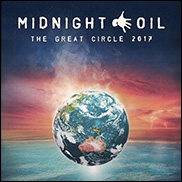 SYDNEY, NSW (CelebrityAccess) — Australian rock legends Midnight Oil are making good on their 2016 promise to return to the touring stage and have announced dates for their upcoming world tour.

“The Great Circle 2017” World Tour will see the group’s classic line-up hit the road for 6 months, starting, with a yet-to-be-announced pub gig in Sydney.

Midnight Oil will then hit the road for 30 international shows over the northern hemisphere's summer, with scheduled dates at venues such as Sao Paulo’s Espaço das Americas and the Wiltern in L.A. to London’s Hammersmith Apollo and The Olympia in Paris.

Then, in October and November, the band will return to their home turf for 18 dates around Australia before finally closing out in Sydney at the Domain on Nov. 11th.

These will be Midnight Oil’s only shows in the last 15 years apart from two stadium benefit concerts (and their related small warm-up gigs); “Waveaid” at the Sydney Cricket Ground (2005) and “Sound Relief” at the Melbourne Cricket Ground (2009). It will also be the group’s most extensive world tour since their classic late 80’s/early 90’s albums like “Diesel & Dust”, “Blue Sky Mining” and “Earth & Sun & Moon.”

"I thought it would be great if it did [happen] but obviously I was involved in other things," frontman Peter Garrett said during the announcement of the tour, per the Sydney Morning Herald. Garrett went on to note that the band has been hard at work on rehearsals and that it never sounded "fresher, nastier or sweeter."

Drummer and songwriter Rob Hirst also teased that the band had a new studio album in the works.

"We have plenty to write about," Hirst said during the press conference, according to the Herald. – Staff Writers