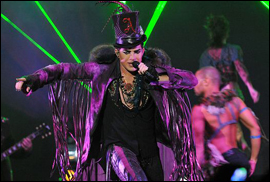 KUALA LUMPUR (CelebrityAccess MediaWire) — Openly gay performer Adam Lambert, noted for his flamboyant stage presence, toned down his performance when he performed at the Putra Stadium in Bukit Jalil on October 14tg. Lambert reportedly avoided sexually provocative moves at a concert that was protested by dozens of Islamic protesters.

While Lambert has said that he does not believe his shows were offensive, but agreed to a request by the Malaysian government to make a few adjustments to his show, the Wall Street Journal reported.

Lambert joins ranks with other performers who have made concessions to religious conservatives in Malaysia, such as Gwen Stefani and Fergie. Both female singers 'dressed down' from their typically skimpy stage costumes when they performed in Malaysia, while other performers such as Beyonce have canceled shows after controversry started to swirl.

Lambert, who was an American Idol runner-up, is currently on the road with his Glam Nation tour. – CelebrityAccess Staff Writers