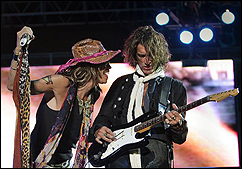 MAUI, Hawaii (CelebrityAccess MediaWire) — A lawsuit stemming from the last-minute cancellation of a concert by Aerosmith has been approved for class action status, the Second Circuit Court in Hawaii has determined.

The lawsuit was brought by concertgoers who were angered over the band's decision not to make a September 26, 2007 gig in favor of a more lucrative offer in Chicago. At the time, the band claimed that they were forced to cancel because they couldn't manage to get all their gear to Maui in time for the show. This excuse would have held more water for the short-shrifted fans if the band hadn't subsequently played at another private, corporate gig for Toyota on the island a few days later.

Now said angry fans are looking for compensation in excess of $1 million dollars to console them and ameliorate the financial burdens imposed by travel and lodging plans they had made for the canceled gig and after this latest court ruling, they can do with class. Aerosmith's lawyers had, unsurprisingly, argued against class status, noting that any settlement imposed by the court in such a situation would likely be more significant, Ticketnews reported.

"As for Plaintiffs' suggestion that greed led defendants to drop Maui in lieu of Chicago, that is not an allegation of fact, it is a conclusion," Aerosmith's lawyers wrote in their objection to the class status "More important, it is a conclusion that has no legal significance because it is economically irrational. Plaintiffs allege the Moving Defendants originally had three concerts scheduled – Chicago, Maui and the Toyota event in Oahu – and then, purportedly out of greed, eliminated Maui and performed two concerts. That makes no sense. If Plaintiffs' allegations of motive are correct, the only rational thing for the Moving Defendants to have done would be to play all three concerts, not reduce their revenues by playing just two."

The next phase of the case will be the setting of a trial date — stay tuned litigation fans. – CelebrityAccess Staff Writers