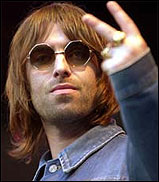 LONDON (CelebrityAccess MediaWire) — Britain’s baddest rockstar is back in the spotlight after a recent explosive interview with NME magazine.

In the current issue, the oft-controversial singer attacked everyone from Franz Ferdinand to Block Party to Scissor Sisters to Keane to Pete Doherty.

Speaking about pop-rock kings Franz Ferdinand, and lead singer Alex Kapranos, Gallagher told the magazine: “He reminds me of [expletive] Right Said Fred. You put on ‘I’m Too Sexy For My [expletive] Thing’ next to their records and I bet you any money it’s the same person. It’s the same [expletive] person! He’s just gone on the Atkins diet and grown his hair! Not my thing at all. I don’t like quirky, weird music. It’s not my cup of tea all that nonsense, million miles an hour music that’s not going anywhere.”

Gallagher didn’t hold his tongue in regards to anyone.

He referred to Babyshambles frontman Pete Doherty a “smackhead” and Doherty’s former group, The Libertines, “rubbish.”

He called newcomers Kaiser Chiefs “a bad Blur,” and used too many four-letter-words to convey his feelings for Scissor Sisters to print here.

He did, however, reserve praise for one unlikely star.

“It’s Charlotte Church for me, man,” he told the magazine. “She could be the next Liam. She’s got a great voice and [expletive] has it. She knows how to get [expletive] hammered and she freaks people out.”

Now, should we wait for the backlash or assume everyone knows to keep clear of fighting back when dealing with Liam Gallagher?

Oasis’ new album “Don’t Believe The Truth” is set for release on May 30. –by CelebrityAccess Staff Writers