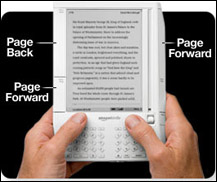 Do you know anything about the book business? A bunch of self-important liberal arts majors clueless in business selling their books in an

antiquated way. You want to know about tour support? Then check out an author trip/itinerary. If they even pay, the publisher doesn’t know

how to book gigs or route you. And the money involved is PEANUTS!

The value of a great book? Every bit as high as that of a great record. But somehow publishers are willing to let Amazon sell FIRST RUN

Indie bookstores are failing at the rate of indie record stores. The publishers need a solution. They’re not holding back,

90,000 titles are available for the Kindle. They want people to READ!

There’s no manufacturing, no shipping… Kinda sounds like the music business, doesn’t it? THEN WHY SHOULD THE PRICE OF DIGITAL MUSIC GO UP?

Fuck Doug Morris and his cartel. They’re so out of touch, they’re probably jetting away to St. Barts for Thanksgiving. They don’t want to

associate with the little people.

But it’s the little people who pay your bills.

Amazon doesn’t make you buy a bucket of books. There’s no album. As for Jermaine Dupri’s comment about chapters… Hell, go

online, you can read chapters for free! Some GIVE AWAY THE ENTIRE BOOK ONLINE! Yup, if you want the inferior e-book, be my guest, read it as

a PDF. You want the real thing, you pay for it. If CDs are so fucking great, maybe the record industry should adopt this same philosophy!

Oh, don’t tell me variable pricing is about lowering pricing. Yup, on Vanilla Ice. No, not even Vanilla Ice. On that teen rapper Irving put

out on Giant. Shit, I can’t even remember her name. You’ll be able to buy her tracks for 79 cents. The tracks of those you’ve never heard of.

I don’t know if the Kindle is the answer. But some kind of electronic book reader is gonna succeed in the future. And chances are, just like

in the music world, one company will dominate. Just like on the Web. It’s not like brick and mortar, EVERY STORE is local online. You only

Right now iTunes is it. Doug Morris is trying to enable Amazon by selling DRM-free MP3s, to teach Apple a lesson. What lesson is

this? That old fart record execs can shoot themselves in the foot? That they’re clueless regarding the digital age? That they’d rather lose

their business as long as they can maintain the illusion of power?

The people get it. Costs with digital are cheaper. The only people who don’t get it are the manufacturers/producers. In the old days, they

controlled the media, people only knew what they wanted them to. But now EVERYBODY knows acts make almost nothing on the iTunes Store. Why

didn’t Jermaine Dupri talk about THAT?

It’s the labels who are removing the value from recorded music. By trying to maintain the CD model. That paradigm is broken, dead. It’s time

to try something new. Getting more people to listen to more music, by charging everybody a little bit.

When the BOOK business is leading the charge, you know you’re in trouble…