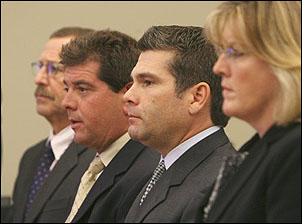 WARWICK, RI (CelebrityAccess MediaWire) — Six of the thousands of photographs collected as evidence in the Station nightclub fire criminal cases may soon become public following the decision of a Superior Court judge to allow lawyers to file them in federal court without being sealed.

Judge Francis J. Darigan Jr. did not take up a request by Attorney General Patrick Lynch for permission to release about 1,000 other photographs, however, according to the Providence Journal.

The six photographs seem “undramatic and unlikely to add much to the public understanding” of the fire, according to the paper. The nightclub blaze claimed the lives of 100 and injured more than 200 other people.

Court papers requesting their released described the photographs: “These photographs show how extensively Jeffrey and Michael Derderian…used egg-crate shaped polyurethane foam in an exposed manner on the interior walls and ceilings of The Station.” They “do not depict the victims of the February 20, 2003 fire at The Station and do not invade any of the victims’ privacy.”


The Derderian brothers, who owned the club, entered pleas, along with tour manager Daniel Biechele, to 100 counts of involuntary manslaughter. Michael Derderian, 45, and Biechele, 30, were sentenced to serve four years in prison. Jeffrey Derderian, 40, was ordered to perform 500 hour of community service. –by CelebrityAccess Staff Writers