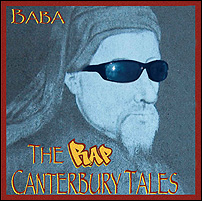 WELLESLEY, Mass (AP) — The lights dim, the music pumps — a steady beat that can be felt in the bones — and Baba Brinkman struts and bounces around the stage, belting out his rhymes about hard living, violence, sex and the secrets to true love.

He gets his inspiration not from growing up in the 'hood, but from the musings of a 14th-century English poet.

"Ready to kill with their jagged-edged daggers drawn/The three aggravated braggarts staggered up the lawn/And without dragging on while the story is told/Beneath the tree they found a bag filled with glorious gold," Brinkman raps in a seamless cadence, updating Geoffrey Chaucer to hip hop.

Brinkman, a native of Vancouver, British Columbia, who has a master's degree in medieval and Renaissance English literature from the University of Victoria, has adapted some of Chaucer's earthy, satirical and pious "The Canterbury Tales" into rap.

There are remarkable parallels between "The Canterbury Tales" and modern rap, Brinkman said at Wellesley College during a recent stop on his tour of high schools and colleges across the eastern United States and Puerto Rico.

"Chaucer and rap are both performance-based and they're both battles of words where your proficiency gets you by," said Brinkman, whose master's thesis compared the two.

"The Canterbury Tales" was a storytelling competition among pilgrims on their way to Canterbury Cathedral, much like freestyle rap battles today.

"Before I ever read anything about (Brinkman) I could see the similarities between rap and Chaucer, especially the storytelling aspect," said Kathryn Lynch, a Wellesley English professor who teaches classes on "The Canterbury Tales."

"Like rap, the sound of Chaucer is important for the audience's experience, and they are both competitive verse forms."

Brinkman, 27, creatively adapts the Middle English of "The Canterbury Tales" into contemporary English, yet stays faithful to the original.

"My goal is that anyone who knows nothing about Chaucer would really be able to appreciate it," said Brinkman, who has previously performed in Canada, the United Kingdom and Australia.

He captures the humor, the vulgarity, the suspense, educating and entertaining in the process.

"I think seeing something like this, you'd learn as much, if not more, than any other way other than reading Chaucer in the original," Lynch said after a show at Wellesley attended by about 100 people. "He really knows the tales he's rapping."

College students clap and laugh as they see the stories most have only read come to life on stage.

"Brinkman's performance gives a new form of life to Chaucer's poetry. … It can be enjoyed in a live and dynamic way," said Kyle Koerber, who saw a show at the College of the Holy Cross in Worcester, Mass.

Brinkman performs the "Pardoner's Tale," the "Miller's Tale" and the "Wife of Bath's Tale." His one-man show, with recorded music and a few props that include a couple of chairs, a bottle of water and a bandanna, is constructed much like the pilgrims' journey in "The Canterbury Tales." He acts as the narrator — a stowaway fan on a tour bus — and plays the part of three rappers on the bus engaged in a rap battle.

He mixes in other songs, including a rap based on his experiences growing up in British Columbia working for his family's tree-planting business.

Brinkman has been a rap fan since age 10, influenced by Young MC, Slick Rick, Ice T, 2 Live Crew, Snoop Dog and LL Cool J. "Baba" is not a street name — it's a word meaning peace that his father bestowed upon him the day he was born, and has always been used instead of his given name, Dirk.

He wants to be known as a rapper, not just as the guy who raps Chaucer. He has released three independent CDs, including "The Rap Canterbury Tales," with a picture of Chaucer wearing wraparound shades on the cover.

"When I started rapping, I decided I am going to dedicate my life to this," Brinkman said. "My options were either drop out of school and battle my way to the top, or stay in school and use my education. I spent college advocating to my professors that rap should be taken as a literary form that should be studied the same way."

Rap purists don't think a white kid from Canada, a self-described son of hippies, can relate to an art form that developed on the streets of urban America.

"That's a hurdle I have to jump," he said. "People have a narrow idea of what constitutes rap based on what they see on TV. Who's to say that white people are not supposed to rap, or Asians, or Hispanics? … Hip hop is all about proving your skills. About keeping it real. Some people are skeptical at first, but when they hear me, they realize I can rap."

Academics sometimes sniff condescendingly. Brinkman performed at Harvard University to an audience that included the chairman of the English department, but Columbia University was not interested when he offered to bring his act to campus, he said.

But there are rap adaptations based on Shakespeare and "Oedipus," all part of a genre dubbed "Lit-Hop," which is also the name of Brinkman's latest CD.

Rapping Chaucer is like putting any classic literature into a modern context, including Hollywood versions of Shakespeare, said Tyrone Williams, an English professor at Xavier University in Cincinnati.

"If Chaucer was around today, he'd probably rap," Brinkman said.