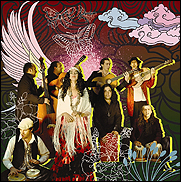 "This is a terrible hassle," Jemima Cano, the band's manager told Billboard. "London is really important for us, it's the music capital of Europe."

Cano said that the band was preparing a modified acoustic set if the UK Government continued to deny the two cuban musicians, who play keyboards and drums, visas.

"Apparently, the consulate was not happy with the sponsorship certificate, which requires a letter of invitation from the promoter. They refused to accept that Enrique and Carlitos had enough money for the visit – it's absurd, we were going to pay everything. Enrique and Carlitos are legal residents in Spain, but with Cuban passports. The problem in this case is that they are Cubans, and we know how many people in the West view that." Canos told Billboard.

Ojos de Brujo is touring in support of their third studio album, "Aocana," which has been charting comfortably in Spain. The tour kicked off on March 17th and dates have been scheduled throughout Europe with plans for the U.S. and Canada in 2010. – CelebrityAccess Staff Writers