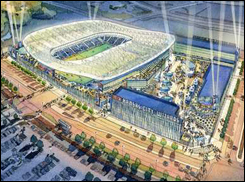 KANSAS CITY, KS (CelebrityAccess MediaWire) — The Unified Government of Wyandotte County has approved a more than $400-million deal to bring a major expansion of the Cerner Corporation and an 18,000 seat stadium for the Kansas City Wizards MLS soccer team to the Village West tourism district in Wyandotte County.


The project will create 4,000 new healthcare technology jobs at Cerner and several thousand additional jobs connected with the sports stadium and spin-off employment.


“This partnership between the Unified Government, the State of Kansas and development team will create thousands of high paying jobs, help the State meet its goal of becoming a national leader in the healthcare field, create educational and job opportunities for our students and bring the only major league sports franchise to Kansas,” said Mayor Joe Reardon.


Under the agreement, the Cerner Corporation will begin construction of a 600,000 square foot office complex by the end of 2011. Construction on
the sports stadium will start in 2010 and be completed in time for the 2012 Major League Soccer season.


In addition to the soccer stadium, the proposal includes 18 tournament quality soccer fields designed to attract national soccer tournaments to be located in Wyandotte County Park. The $30-million tournament complex will be one of the largest in the Midwest, attracting more than two million athletes, family members and spectators every year to Kansas City. The tournament fields will be built before the end of 2012. The developers will also construct three recreational soccer fields located throughout Wyandotte County for use by residents.

The more than $400-million total public/private investment is financed in part by $147-million in Star Bonds and $85-million State of Kansas tax credits and cash for job creation. The STAR Bonds will be repaid from sales tax revenues generated by retailers in the Village West shopping and tourism district. Economic benefit to the Wyandotte County community in the first six years will exceed $10-million more than what would be realized if the project was not built. Both the Cerner office complex and the sports stadium will pay full property taxes.


Cliff Illig, a co-founder of the Cerner Corporation and an owner of the Kansas City Wizards, said, “This is a new benchmark for how public/private partnerships ought to function. And we think ultimately, there will be more than 4,000 Cerner associates working at the Village West campus.”

An important benefit of the project is keeping the Kansas City Wizards MLS Soccer team in Kansas City by building a permanent home stadium. The Kansas City metro is truly a regional community. No matter which side of the state line the stadium sits, the team is still a Kansas City team.

“This is a great day for soccer in Kansas City,” OnGoal CEO Robb Heineman said. “After a lengthy process to keep the team in the metropolitan area, OnGoal and the Kansas City Wizards are thrilled to receive final approval for our stadium and fields complex. Our vision will now become reality for our supporters and organization. The stadium has been designed to deliver the highest-level guest experience in an intimate, loud and intimidating atmosphere to build a true home field advantage for the Wizards.”

The proposal was first unveiled in September 2009 at a public meeting of the Unified Government Commission when a memorandum of understanding outlining the scope of the project was approved. Since then, two public hearings were held by the UG Commission, leading to the final approval of the detailed developer agreement.

The Cerner Corporation Campus and the Kansas City Wizards sports stadium and tournament soccer fields complex ensures the continued success of Village West as a premiere tourist destination, while meeting critical needs in the community for new jobs and economic growth.
–by CelebrityAccess Staff Writers