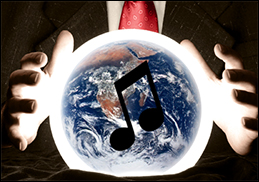 (Hypebot) – Analysts MIDiA, who claim an 84% success rate for their 2016 predictions are back with their crystal ball for 2017. Music predictions include a Spotify IPO and the subsequent start of a new generation of experiential streaming services.

2017 will be the year of the platform, says music and entertainment industry, MIDiA says. It will be the year in which the major tech companies will fight for pre-eminence in the digital economy, competing for consumer attention through formatting and distribution wars.

Facebook, Amazon, Tencent, Microsoft, Apple and Google/Alphabet will be the main players. "2015 was about parking tanks on each other’s front lawns, in 2016 shots were fired, 2017 will be all-out war," the analysts write in their annual report. "Artificial Intelligence (AI) and voice assistance will be key battlegrounds and indeed will form the glue of Mobile Life Ecosystems."

Other key predictions for 2017

Services are the new black: Maturing ‘phone and tablet markets mean that hardware companies will place a greater focus on digital content and services in 2017. Services are an opportunity to drive strong growth that will compensate for slowing device sales

Ad market growing pains: Digital advertising inventory supply will exceed demand in 2017. Audience engagement will grow more quickly than advertisers’ appetite. Consequently, ad rates will decline with the bloating of the market by content farms accentuating the problem. Facebook will not be alone in seeing slowing ad revenues in 2017.

A tech major will be hit with the first stage of an anti-trust suit: The incoming US Presidency has made its anti-trust inclinations clear. A likely early target will be the AT&T/Time Warner merger. The global-scale tech companies may be mature companies but their respective sectors are not. Regulation is one of the inevitable growing pains of maturing business sectors. Digital is next.

Snapchat’s IPO will be digital’s canary in the mine: App store era unicorns and their attendant Initial Public Offerings (IPOs) will redefine the media and tech landscape. Not only will the success, or failure, of Snapchat’s IPO affect those of Uber and Spotify, poor showings could deflate the VC bubble and put an end to the grow-at-all-costs For the music industry, the stakes are even higher, as an under-achieving Spotify IPO would create a crisis in confidence in the entire streaming market.