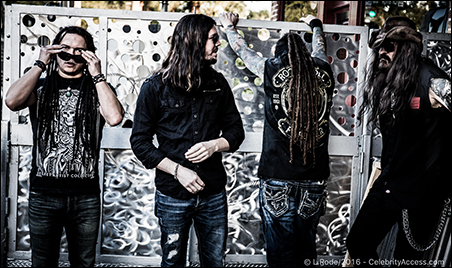 LOS ANGELES (CelebrityAccess) — After acquiring front man Bobby Amaru in 2011, Saliva became infused with new blood, energy, and spirit. The same energy launched Saliva’s career in 2001 with the release, Every Six Seconds – a certified Gold-selling album, containing the hits, “Raise Up,” and 2002 Grammy nominated, “Your Disease.”

Saliva’s in-your-face, anthemic writing style continued with a series of hits including: “Always,” “In It To Win It,” and the Nikki Sixx co-written, “Rest In Pieces.” After touring the world with bands including (but not limited to), Sevendust, Aerosmith, and KISS, Saliva began to shift focus toward their next studio album. This time, Saliva moves forward on their own terms.

After taking a year to write, record, and self-produce new material, Saliva became what is now a unified team. With the upcoming release titled, Love, Lies, and Therapy, the band would not be rushed or pushed into deals that were not advantageous toward the growth and expansion of Saliva as a whole. Upon adding former Shinedown and Fuel bassist, Brad Stewart, as a permanent member, Saliva solidified their new lineup consisting of: Wayne Swinny, Paul Crosby, and Amaru.

Saliva’s confidence in their new album and line-up was reaffirmed when Universal Music Enterprises
(UMe) signed the band to a worldwide distribution deal. Moving forward with a new management team (Moving Mountains Management/Career Artist Management) and a major label endorsement, Saliva steps back into the spotlight to claim their spot at the top of the rock charts with Love, Lies and Therapy – proving the band remains a force to be reckoned with.

“Saliva is back with a vengeance and looking toward the future without forgetting where we came from. Front man Bobby Amaru shines on our latest effort, and I am proud to share the stage with him and new bass player, Brad Stewart, each and every night on tour. Love, Lies, and Therapy stands toe-to-toe with our biggest hits and sets the stage for bigger and better things in 2016 and beyond,” says original member and lead guitarist Wayne Swinny. – Laura L. Rode