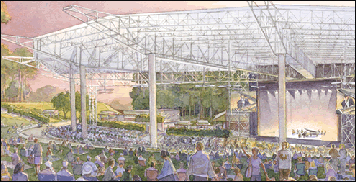 ATLANTA (CelebrityAccess MediaWire) — The Atlanta Symphony Orchestra, a division of the Robert W. Woodruff Arts Center, Inc., today announced that Clay Schell has joined the ASO and will serve as the General Manager of Popular Venues and Presentations for Verizon Wireless Amphitheatre at Encore Park and Chastain Park Amphitheater. Additionally, Holly Clausen has been hired as the Director of Marketing for Popular Presentations at both venues and the appointment of Jill Lovell as the Director of Sales for Verizon Wireless Amphitheatre at Encore Park was announced.

Schell brings thirty years of professional and managerial experience. He most recently has served as tour consultant in Europe working with Joe Cocker. Previously, Schell served as General Manager of HiFi Buys Amphitheatre in Atlanta and Southeast Region Manager for House of Blues from 1997-2006. Prior to House of Blues, Schell ran his own consulting company where he helped oversee the successful implementation of artist touring for Mark Knopfler, Tina Turner, Dire Straits, Paul McCartney, Joe Cocker and Aerosmith.

“In Clay Schell the Orchestra has hired one of the most respected names in the popular entertainment business – he joins a dynamic musical organization in the ASO, and we welcome him to our team,” said Allison Vulgamore, President and Managing Director of the ASO.

“I am thrilled to be a part of the Atlanta Symphony Orchestra’s team of innovative professionals and look forward to our exciting work together”, said Schell who maintains a residence in Atlanta.

As previously announced, Indianapolis based Live-360 entered into long-term consulting agreements with the ASO for both Verizon Wireless Amphitheatre at Encore Park and for its shows at Chastain Park Amphitheater. Live-360 will consult with both Schell and Clausen in their new roles.

Clausen most recently served as Regional Director of Marketing for AEG-Live in Nashville, TN marketing their shows in Georgia, Tennessee, Kentucky, Alabama and portions of Florida. Prior to AEG, Clausen spent eight years at HiFi Buys Amphitheatre as Director of Marketing, Southeast for House of Blues Concerts.

Lovell has served in her current position with the ASO since last spring. As Director of Sales, Lovell is responsible for the advertising, promotion and sales of Premium Seat and Sponsorship packages, as well as managing the VIP experience, at Verizon Wireless Amphitheatre at Encore Park. Lovell was most recently at Ford Amphitheatre in Tampa, FL where she set sales records for four years. – CelebrityAccess Staff Writers