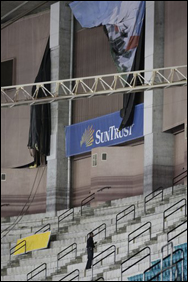 ATLANTA (CelebrityAccess MediaWire) — A direct tornado strike in downtown Atlanta has caused more than $130 million dollars worth of damage to the city, including extensive damage to Live Nation's Atlanta Tabernacle. The 98-year-old concert hall is considered to be a historic landmark in the city, located on the ironically named Luckie Street

"Most of the windows are blown out, the roof is severely damaged and there is lots of water damage inside," Steve Woods, the building's electrician told the The Atlanta Journal-Constitution.

Woods went on to say that he had observed trees and streetlights blown down in front of the concert hall and that he expected "major damage" inside.

"I know a water pipe broke inside," building manager Eric Snoddy added. "We're pretty much messed up. It's going to be awhile before we reopen. But it looks like we survived better than some places." – CelebrityAccess Staff Writers