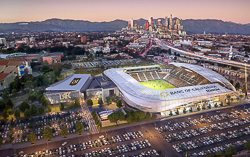 Los Angeles-(CelebrityAccess)–Los Angeles Football Club (LAFC) has broken ground on its new 22,000-seat, soccer-specific ground, which will be known as the Banc of California Stadium.

The Major League Soccer (MLS) Club also announced a strategic partnership with Banc of California, highlighting a partnership that shows the community focus of both organizations.

The new state-of-the-art development at the site of the former Los Angeles Sports Arena will bring more than US$350m in private investment to South Los Angeles.

This includes a district that will be active on non-game days, 365-days of the year, that will feature a large public plaza, restaurants, retail store, and a conference and events centre, serving as a sports, entertainment, civic, and cultural landmark for Los Angeles.

Berg said: "We start here. After years of planning and hard work we are set to make history here in the heart of the city. Banc of California Stadium will allow for greater sports-viewing and live entertainment experiences to take place in Los Angeles than ever before."

Banc of California Stadium will host a variety of community and cultural events, but has been designed with the soccer fan in mind. The 22,000-seat state-of-the-art facility will offer an intimate game-day experience for fans. The Stadium is scheduled to be completed in time for the 2018 MLS season.

The Stadium is being constructed in a place rich in Los Angeles sports history — on the site of the former Los Angeles Sports Arena and just steps from the Los Angeles Memorial Coliseum.

Mayor Garcetti said: "Los Angeles is the sports and entertainment capital of the world, and today we open a new chapter in our rich history with the world’s most popular game."

The construction of this new stadium in Exposition Park will create thousands of good-paying jobs — and when their new home is built, our team will bring soccer fans from everywhere into the heart of our city.-Staff Writers
Image courtesy LAFC.