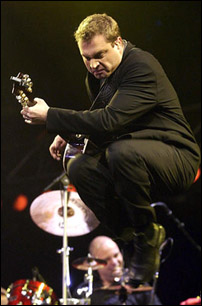 Steven Page, singer/songwriter of Barenaked Ladies, will be the keynote speaker of the fourth
annual Prairie Music Week, in Winnipeg, September

26 – 29, 2002. Barenaked Ladies hosted the Juno Awards this past spring to which Page
documented his controversial opinions for the Globe & Mail in an editorial that had tongues
wagging. Page's address for Prairie Music Week is based on this article and titled "The
Peaks and Pitfalls of Making a Living as a Canadian Musician."

"We're ecstatic Steven Page has agreed to join us this year," said event
producer Thom Sparling, adding the address fits perfectly with the
conference theme No Smoke, No Mirrors, a topic chosen to help demystify the
music business. "Over the career of Barenaked Ladies, Steven has shown he
not only has depth as an artist, wit and charisma as an entertainer, and the
musical prowess of an international star, but the intelligence necessary to
make an impact on the world music scene in all aspects of the business. He
has a lot of wisdom to offer our delegates, and those who come to hear him
speak will be able to count themselves amongst the lucky few."

Page, who considers Canadian musicians "survivors," will lay open some of the
myths and misconceptions about the music industry, addressing the small
sliver of the pie artists get from their own recordings and live
performances, for example.