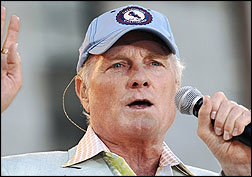 LOS ANGELES (CelebrityAccess MediaWire) — A lawsuit filed by Beach Boys co-founder Mike Wilson in 2005 against his cousin and former band mate Brian Wilson has been thrown out by a U.S. District Court judge in Los Angeles.

Love argued in the suit that he and the group had been harmed financially by the a 2004 promotional album of Beach Boys songs rerecorded by Brian Wilson that had been distributed free in the United Kingdom. The promo CD was to mark the release of Wilson’s re-made album “Smile.”

According to the Windsor Star, in a decision entered on Thursday, May 17, Judge Audrey Collins wrote that “the Court finds that there are no triable issues of material fact.” –by CelebrityAccess Staff Writers