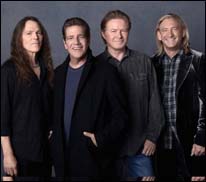 On commencement eve, as is Berklee's tradition, students will pay tribute to the honorees by performing music associated with their careers at the Agganis.

Don Henley, Glen Frey, Joe Walsh, ane Timothy Schmit of The Eagles have sold more than 120 million albums worldwide, with five number one singles, six Grammy Awards, five American Music Awards, and six number one albums. Their Greatest Hits 1971-1975 is the best-selling album of all time, exceeding sales of 29 million units. The band's Hotel California and Eagles Greatest Hits, Vol. 2 have sold more than 16 million and 11 million albums, respectively. The Eagles were inducted into the Rock and Roll Hall of Fame in 1998.

Alison Krauss is a bluegrass virtuoso who bridges the gap between roots music and country, rock, and pop. She has worked with some of the biggest names in popular music, including James Taylor, Phish, Dolly Parton, Yo Yo Ma, and Bonnie Raitt. Since signing with Rounder Records at 14, Krauss has sold over 12 million albums and won 27 Grammy Awards, the most for any female and the second most of any recording artist in Grammy history. Her latest album — recorded with her longstanding band Union Station — is the endlessly impressive Paper Airplane (2011), which debuted at #1 on the Billboard Country, Bluegrass, and Folk Album charts upon its release earlier this year.

Mulatu Astatke is an Ethiopian musician (piano, organ, vibraphone, percussion), composer, and arranger. He is known as the father of Ethio-jazz, a unique blend of pop, modern jazz, traditional Ethiopian music, Latin rhythms, Caribbean reggae, and Afro-funk. Born in 1943, Astatke was musically trained in London, New York City, and Boston, where he was the first African student at Berklee College of Music. He went on to work with Duke Ellington and other acclaimed jazz artists, found a music school, and open his own club. Astatke’s work shepherded in a golden age in Ethiopia's pop and jazz circles from 1968 to 1974. In 2004, he began collaborating with Either/Orchestra, and in 2009, he released an album with the London-based collective the Heliocentrics. Since 2010, Mulatu and his band have toured regularly behind Mulatu Steps Ahead, his latest release on Strut Records.