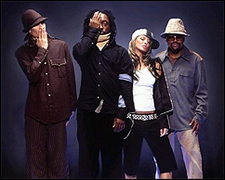 CHARLOTTETOWN, PEI (CelebrityAccess MediaWire) — Set to perform before nearly 20,000 Canadian fans on September 3rd, the Black Eyed Peas are receiving some serious opposition from city leaders in Prince Edward Island in regards to what may take place at the show.

City officials recently held a meeting to discuss security plans at the upcoming concert, lining up over 100 officers and guards to stand duty.

Security will be tight at the entrance, all liquor sale locations, and random patrols will monitor the crowd. One unit will focus solely on traffic control, and there will be a full command post and detention center on site.

According to Deputy Police Chief Richard Collins, “Everyone entering the site is subject to search. No one will be allowed to bring in umbrellas, chairs, cooler cases or alcohol. This plans is based on the system used by Moncton police for the Rolling Stones concert last year.

The Barenaked Ladies recently performed in the city without a hitch, but residents feel that the Peas draw a different crowd.

“Nobody came around to ask anybody what they felt about this concert,” Joanne MacLeod, who lives across the street from the venue, told the CBC News. “It looks like just because The Barenaked Ladies concert went over well, that everything else was going to be well. But you’ve got to realize the Barenaked Ladies had an age group of 15 to 60.

"This concert is going to take 13 to 25 [year-olds]. A lot more alcohol, drugs, needles — whatever can take place at any concert.”

Concert promoter David Carver did not attend the meeting, but is reportedly in regular contact with officials and has cooperated with all rules set in place by the city. The September 3rd concert will also feature the Pussycat Dolls, the Philosopher Kings, Stabilo and Mobile. –by CelebrityAccess Staff Writers