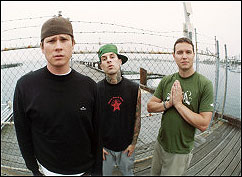 (CelebrityAccess News Service) — Blink-182 drummer Travis Barker injured his right foot on March 12 while on tour in Australia that resulted in the cancellation of the remainder of the tour. The band was Down Under as part of a world tour promoting their new untitled Geffen album, and preparing to play that night in Adelaide, Australia, Travis fell. After seeking medical attention, doctors put a cast on his foot. Travis then reversed his drum kit and played the show that night; however, the band was forced to return home on March 13.

"I am seriously bummed that we couldn't play for our fans in Australia, Japan and Hawaii," Travis said. "It was just a freak accident, but it'll heal, and we'll be back."

Blink-182 will kick off its solo headline U.S. tour in late April. Their co-headlining tour with No Doubt begins in Indianapolis, IN on June 1, and wraps up in San Bernardino, CA at the Hyundai Pavilion on June 26. — Jane Cohen and Bob Grossweiner