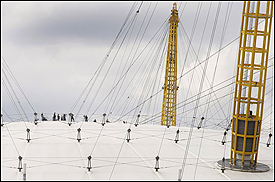 LONDON (CelebrityAccess MediaWire) — Bon Jovi has returned to the O2 Arena to open their twelve-date residency at the venue, which they inaugurated 3 years ago. The residency kicked off on June 7 and will see the Grammy Award-winning band in London until June 26th.

Promoted by AEG, Bon Jovi's residency has proven to be a hot ticket and the stand has completely sold out with more than 175,000 tickets sold, AEG's Rob Hallett told Billboard.

To launch the 12-date stand, Bon Jovi opened their first gig while atop the roof of the venue, where they performed four songs before making a descent to the stage with the assistance of mountaineering experts, Billboard reported.

Bon Jovi's residency comes in the midst of their international "Circle" Tour, which launched earlier this year and is expected to run into 2011. AEG expects that their current outing will outpace their previous tour, 2008's top grossing "Lost Highways" tour.

"We'll beat Lost Highway easily," Hallett told Billboard.biz. "I can't see anyone coming close to this tour. U2 would have been our only challenger but unfortunately Bono's hurt his back and we hope that he recovers quickly. But Bon Jovi, I think, will be head and shoulders above anyone else." – CelebrityAccess Staff Writers