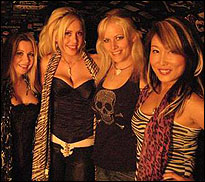 NEW JERSEY (CelebrityAccess MediaWire) — Bon Jovi's lawyers have taken legal action against an all-female tribute band Blonde Jovi, saying that the girls are using a name that's too similar to the original. Bon Jovi's sharks also took exception Blonde Jovi's use of artwork that they say is trademarked.

A letter from the law firm Blakely Sokoloff Taylor & Zafman to Blonde Jovi stated, "It has recently come to our attention that your band is using the mark and name BLONDE JOVI in connection with live musical performances; more specifically, a Bon Jovi tribute band."

"Our investigation also uncovered that you are using BJP's Heart and Dagger' Logo trademark prominently on your website. Unfortunately, and despite the fact that our client appreciates the reverence that your band pays tribute to Bon Jovi, as a tribute band, our client nevertheless is charged with the duty of enforcing its trademark rights."

The tribute act has apparently decided not to contest the matter and on their myspace page, they posted:

"Due to threatened legal action by Jon Bon Jovi's attorneys, we will no longer be using the name BLONDE JOVI. We are temporarily calling ourselves BLONDE JERSEY, until we come up with a new name. If you have any name suggestions, please email us! Nothing containing JOVI, or anything similar to JOVI may be used so BLONDE GIOVI, BLONDE JOE V, BLONDE JOVIE, are not options. Thanks for your support!" – CelebrityAccess Staff Writer