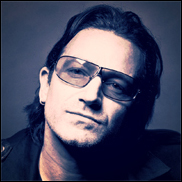 NEW YORK (CelebrityAccess) — The woman who called rescue workers for U2 frontman Bono after his bicycle accident in New York last year was booed at by the crowd during a U2 concert at Madison Square Garden.

According to the Associated Press, Bono invited the firefighters who responded to his crash and the woman, known as Alyssa from D.C. as guests to the show. During the show, Bono invited Alyssa on stage to recount her side of the story.

“I am here today because some people, when I crashed my bike here in the city, a beautiful girl made a phone call to 911. She’s from Denver, but she’s here tonight. And so is Engine 44, the firefighters that picked me up off the ground,” he said.

At first, things went okay for the woman, who seemed to win over the crowd after correcting Bono about her place of origin. “So I have to clarify, it’s Alyssa and I’m from D.C., not Denver,” the woman said, drawing some laughs from the crowd.

However, that was the high water mark for Alyssa. “Here’s what happened: I was running in Central Park, there was an accident, obviously I had to stop and help because I’m not from New York, I’m from Virginia, where people are nice,” she continued, which proved to be the exact wrong thing to say to a crowd of New Yorkers, who immediately booed her. – Staff Writers