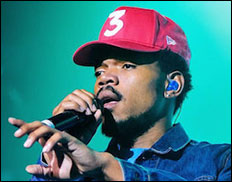 CHICAGO (CelebrityAccess) — Grammy Award-winning artist Chance the Rapper made things a little easier for students in Chicago after he donated 30,000 backpacks stuffed with school supplies.

According to WMUR, Chance made the donation while serving as a marshal of the city’s annual Bud Billiken Parade.

Chance has been a vocal advocate for Chicago's public schools and earlier this year, he donated more than $1 million to the city's school system.